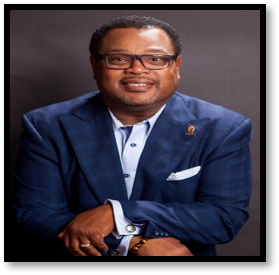 “For we preach not ourselves, but Christ Jesus the Lord; and ourselves your servants for Jesus' sake.”  2nd Corinthians 4:5

Over the last 25 years, Dr. Jerryl V. Moody has served in numerous community and ecclesiastical venues. His intent in ministry is to give God and the people of God the best of his abilities. Because giving your best calls for proper preparation, Dr. Moody has attended and graduated from the Samuel DeWitt Proctor School of Theology at the historical Virginia Union University in Richmond Virginia. He graduated with distinction and is the recipient of the coveted Masters of Divinity degree. Dr. Moody continued in the furthering of his studies at the United Theological Seminary in Dayton Ohio, where he earned a Doctorate of Ministry degree under the mentorship of Dr. William H. Curtis and Dr. Gina M. Stewart. Dr. Moody has also completed post-graduate studies at the Black Theology and Leadership Institute at the prestigious Princeton School of Theology at Princeton University.

For over 22 years, Dr. Moody has served as the Senior Pastor of the Calvary Missionary Baptist Church of Ahoskie North Carolina. His pastoral journey began in serving as an associate minister and youth pastor at the Roanoke Salem Missionary Baptist Church of Garysburg North Carolina. He is also the former pastor of the 1st Baptist Church of Kelford NC. Dr. Moody’s influence has afforded him the opportunity to serve the Baptist churches of Hertford and Bertie County as the former vice moderator and moderator of the West Roanoke Missionary Baptist Association. Because of Dr. Moody’s enthusiastic approach towards what he refers to as the “passionate practice of preaching”, he has been recognized by many of his peers as a “preacher’s preacher”. Because true ministry exceeds far beyond the walls of the church, Dr. Moody dutifully serves the communities of Herford, Northampton, Halifax and Bertie counties in person and in the form of the CEO of JVM Outreach Ministries. Some of his other past and present responsibilities included being a Garysburg [NC] Town commissioner, Garysburg / Gaston Volunteer Fireman, member of the Northampton County Schools’ Ministers’ Council, member of the local chapter of the NAACP, and numerous other civic duties.

The abovementioned notwithstanding, Dr. Moody is pleased to mention the fact that he is happily married to his best friend and partner in life, Mrs. Meshall Sykes Moody. Together, they have two daughters – Jasmine and Jamia, both of whom are still “Daddy’s little girls.” Dr. Moody has also been blessed with five incredible grandchildren, Jerreyl, Jerryce, Jhordyn, Jerryiah, and most recently Jayani, and one son by marriage, Desmond. He is the beloved first-born son of Robert and Barbara Moody and brother to Mr. Robert A. Moody.

Dr. Moody has also been the recipient of numerous service awards of which he is proud to hold. One of the accomplishments that he is extremely proud of is being a member of the Rho Theta Lambda Chapter of The Alpha Phi Alpha Fraternity Inc. This servant of the Lord is dedicated to representing Jesus Christ to the fullest, all-day, and every-day readily serving God and the people of God. When Dr. Moody is asked to describe his ideology of pastoral servitude; He says, he is just a “house-sitter”. He is not the owner of the house, but simply the caretaker. His duty is to tend to the caring and upkeep of its contents, while maintaining the integrity of the house until the Owner returns.